The Looming National Debt Crisis - What are the Tradeoffs?

The U.S. national debt is a looming crisis that will have enormous consequences in the future. “[R]ising debt will slow income growth, increase interest payments, place upward pressure on interest rates, weaken the ability to respond to the next recession or emergency, place an undue burden on future generations, and heighten the risk of a fiscal crisis.” CBO's 2019 Long-Term Budget Outlook, Committee for a Responsible Federal Budget, June 25, 2019.

Unfortunately, the story doesn’t end there, as there are “off balance sheet” liabilities as well:

Worse yet, the projections for the future look grim: 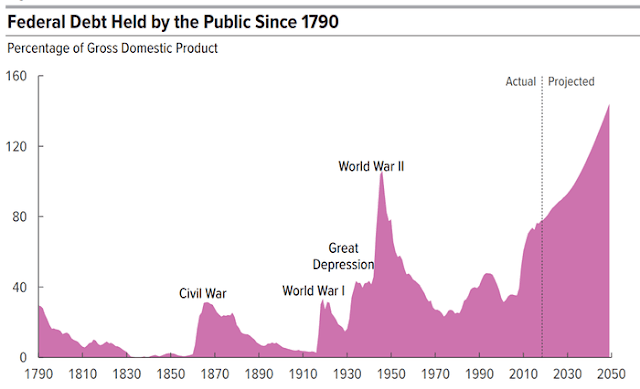 The federal debt is the accumulation of the annual federal government budget deficits.  A federal deficit occurs when total outgoing expenditures (such as for buying military aircraft or paying government salaries and net interest payment) exceeds the revenues collected in the form of taxes and fees, measured over the course of the fiscal year, which runs from October 1 through September 30.

Many think the nominal amount of the debt is not as important as the debt to Gross National Product percentage. That too looks worrisome: 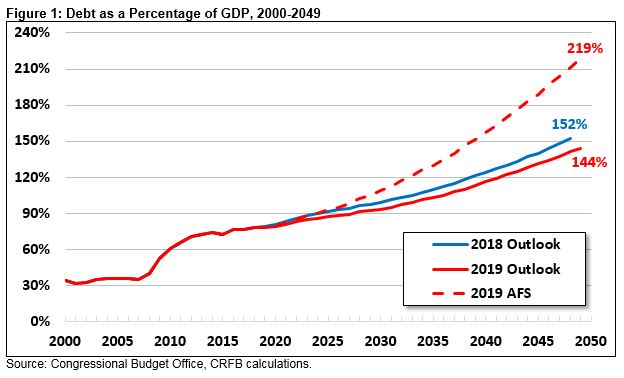 The Alternative Fiscal Scenario (AFS) scenario assumes extension of (1) large parts of the Tax Cuts and Jobs Act (TCJA) that will expire under current law and (2) the substantial spending increases enacted in the Bipartisan Budget Act (BBA) of 2018. With the fear of being blamed for tax increases, many fiscal analysts expect these extensions to be approved by Congress.

With rising healthcare costs funded by Medicare and Medicaid and as interest rates rise (as rise they must from the historically low current rates), the federal budget will be squeezed dramatically, as shown in this chart projection which shows the deficit to grow from 1.3% of GDP in 1999 to this year’s 4.2% and more than double that to 8.7% in 2049, even without the extension of the tax cuts and spending increases AND with “discretionary” (which includes defense) spending decreasing as a percent of GDP. If those are extended, the percentage projected is a whopping 15.5% of GDP.

The situation is worse than that, as Congress will be expected to “rescue” the trust funds which are projected to be exhausted under current law:

The natural “conservative” reaction is to “cut unnecessary spending”. What is the likelihood of that? President Reagan didn’t do it. Neither did the Presidents Bush, Obama or Trump. Why is this so hard? Well, first, any cuts would gore someone’s ox, and no elected official wants to lose votes, especially with all of the active special internet groups’ lobbyists rallying the troops. But even without that, it is hard to make really sizeable cuts. (I..e., “sizeable” cuts in relation to the entire budget. To the average citizen, millions and billions are “sizeable” and should be made where they reasonably can, but as a percentage of the entire budget they might not look big.)

The total Federal budget outlays are over $4 trillion. As the chart shows, the spending is compose of mandatory spending, discretionary spending and net interest. 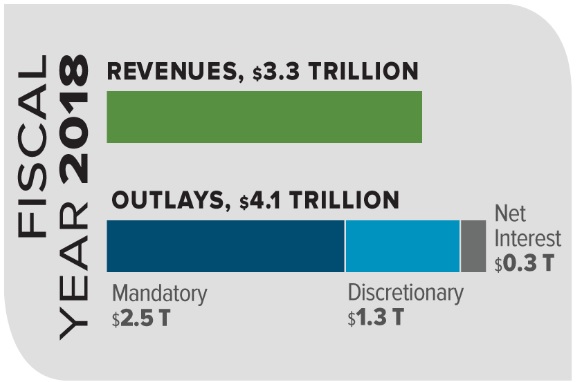 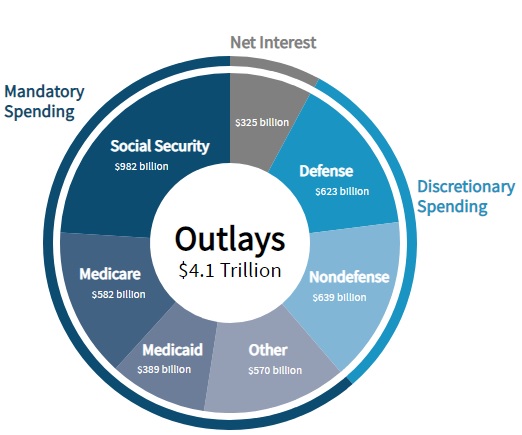 Mandatory spending is primarily for benefits that are set by law with eligibility rules and benefit formulas. These are often referred to as “entitlements” which could be changed but that’s hard to do. The breakdown is shown below. 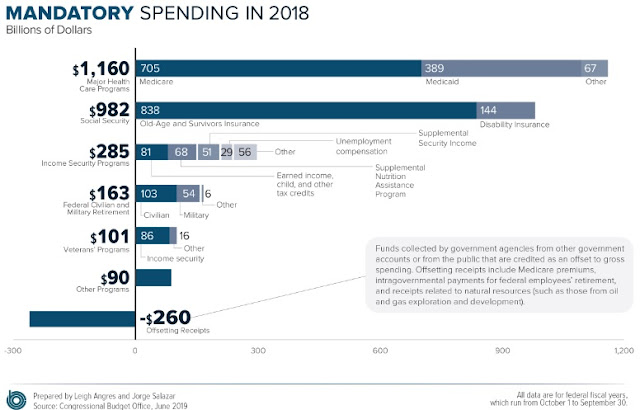 Discretionary spending would be easier to cut, but over half is spending for national defense. With the challenges discussed in my blogpost We are in an Undeclared War, Whether We Like it or Not cutting the defense budget would require a major shift in priorities, if at all possible. The other categories are more vulnerable but small in relation to the total amount of cuts it would take to balance the budget. 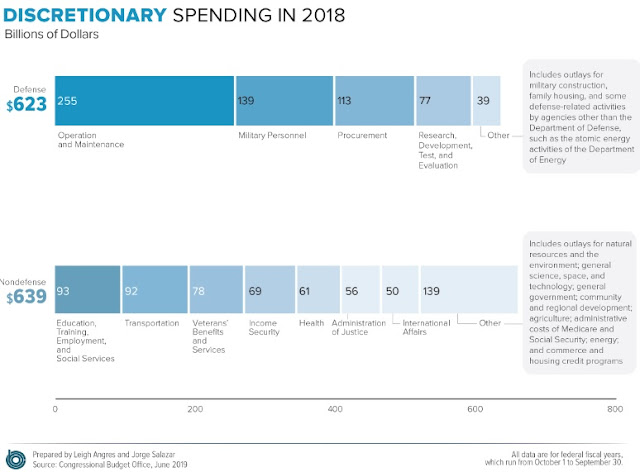 But, even if we can slow the rise of health care costs (or even hold them steady) and stabilize the social security system, we still are left with a projected huge deficit. What then if we wish to shrink the deficit>

All of the above choices would be hard. But, without taking action, the tradeoffs would be to experience "slow income growth, increase interest payments, place upward pressure on interest rates, weaken the ability to respond to the next recession or emergency, place an undue burden on future generations, and heighten the risk of a fiscal crisis" as warned in the opening paragraph.

What are the best choices? "Not to decide is to decide", to quote Harvey Cox.