The Full Truth About my Stance on Climate Change

Clarification regarding reports of my favoring a carbon tax

The following presumes that we accept the scientific evidence that climate change is real, that it is caused by humans burning fossil fuels, and that it is urgent that we act to reduce our carbon dioxide emissions. I understand that there are some very good people who do not share this belief. It is appropriate to be skeptical, as no one wants to believe it’s real. However, the reasons I accept the scientific evidence is summarized in my blog post Skeptical about Climate Science? It is smart to be skeptical. It boils down to what sources of information we choose to believe, and the weight of the credible evidence appears to be strongly against the skeptics.

Although I accept the scientific evidence, that does not mean I am with the “environmental alarmists”. Deeply concerned, but not alarmed.  The 2018 IPPC report says, “Global net human-caused emissions of carbon dioxide (CO2) would need to fall by about 45 percent from 2010 levels by 2030, reaching ‘net zero’ around 2050.” It does not say that the world will end in 12 years.  However,

Further, if the level of CO2 were to continue to rise unchecked, the climate scientists project that the costs and impacts of 3°C. and 4°C would be enormous. What is not known is if there is a “tipping point” beyond which it will be impossible to reverse the rising temperatures, such as may happen once the Arctic muskegs are melted and release the methane trapped within, which is an even stronger greenhouse gas than CO2.

So, I approach this issue as both an environmentalist and as an economist. Few people are comfortable with allowing our environment to change as much as projected if we do nothing. And credible economists believe that the global and social costs of doing nothing exceed the costs of action to contain the rise of the average global temperature. (For example, there are millions, perhaps billions, of people around the world that would be severely adversely affected far more than we would be in Minnesota.) So, given this preamble, what are the options and how do I react?

But first, what criteria would you use to devise a proposed solution?

I do not favor the Green New Deal. In addition to the massive regulations designed to reduce carbon dioxide emissions, it would also attempt to completely transform our economy away from the free market/capitalism which has given us unparalleled prosperity. The hobbling of the economy by moving to a more government-controlled economy could be very detrimental to even being able to economically respond to the challenge.

I do not favor a carbon tax. Simply a carbon tax would provide more money to grow government and would accomplish nothing meaningful to reduce carbon dioxide emissions globally as long as other countries are not similarly constrained.

Neither do I favor a carbon tax with a dividend. While rebating the fees collected to the American people would not grow government, again, it would accomplish nothing meaningful to reduce carbon dioxide emissions globally as long as other countries are not similarly constrained.

I applaud the Statements of Principles of the Minnesota Conservative Energy Forum. It is a good statement of principles and priorities. They support an “all of the above” energy policy and urge conservatives to support action on controlling carbon dioxide emissions. The proposed legislation posted on their website, however, would do very little. And, as with some of the other proposals, with no other country participating, will accomplish nothing meaningful to reduce carbon dioxide emissions globally.

I do support the Energy Innovation and Carbon Dividend Act (H.R. 763) because it is market driven, does not grow government and would induce other countries to also reduce their carbon dioxide emissions.


The studies I have seen project that when the Act is enacted:

I view this as an “insurance policy” because if the climate scientists are right, the long-term consequences far outweigh the costs of action. The Energy Innovation and Carbon Dividend Act is a conservative response to counteract the extreme pressures for the Green New Deal approach that will come to bear if nothing is done. Taking action would give us peace of mind.

I am not against the American fossil fuel industry. I would support the use and safe transport of U.S. produced fossil fuels, for as long as fossil fuels will be needed to be used. This will likely be for quite a while. It makes sense to utilize the American sources and provide American jobs as long as needed. Pipelines built to safety standards are a way to transport oil and gas more safely than by rail or truck, and it makes no sense to oppose the construction of new lines as needed. However, I strongly favor the elimination of all direct subsidies and tax subsidies (including “depletion allowances”) for all sources of energy so that all are on a level playing field (including the negative externalities imposed on others, so all bear the full social cost of their use).

I support the use of nuclear power and oppose the “renewable energy standards” which excludes nuclear. The standards are ineffective anyway, as they only cover the production of electricity, and not vehicular transportation and other carbon dioxide emissions sources.

With the levelized cost of producing wind power and utility sized solar power now less than any other means of producing power, we will have a preponderance of power production that is not constant. Utilities are learning how to use a greater percentage of renewable energy, but there will always be a need for a base source of power that can be dialed up or down as needed to balance supply and demand. Coal and nuclear power have traditionally provided the base. As coal is becoming less competitive, cheaper natural gas combined cycle units are filling the gap. (The “levelized const of energy” studies show that it is unlikely that any new coal powered plants will be constructed in the coming years, unless natural gas is not available in the area, an unusual circumstance.) Existing nuclear power plants can also competitively provide that base, producing more or less as the demand for power varies. Whether new nuclear power plants will be competitive in the future remains to be seen, but new designs and streamlined modular construction may become competitive once all subsidies (including the externalities of fossil fuels) are removed from all sources of power production.

A number of polls suggest that the Republican Party is missing the boat if it denies that we need to reduce carbon dioxide emissions.

“According to a survey from the Yale Program on Climate Change Communication last year, 52 percent of Republicans said if there’s a conflict between environmental protection and economic growth, the environment should come first.” Frank Luntz, https://grist.org/article/the-gops-most-famous-messaging-strategist-calls-for-climate-action/, a prominent Republican pollster and consultant.

Luntz polled the carbon dividend policy in May 2019. It got 2-1 support among Republicans, 4-1 support overall, 6-1 support among Republicans under 40, and 8-1 support among swing voters under 40. Once it was explained to voters in focus groups, most of them got behind it.
It’s probably best not to read too much into one poll on one specific policy (especially from a pollster with some incentive to produce positive results), but some of Luntz’s more general findings echo recent findings in other polls:
In another poll (I forget the source of this), found the following among swing voters: 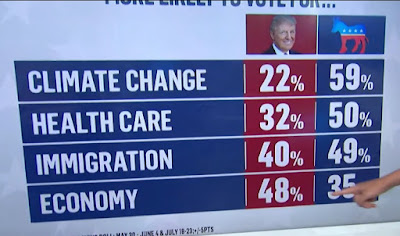 The chart shows the most important issues among swing voters, and whether they lean towards the Republican or Democrat positions on these issues. On climate change, the Republicans are big losers.

The following are charts published at https://secureservercdn.net/198.71.233.9/6ea.d28.myftpupload.com/media/Luntz-Carbon-Dividends-Polling-May-20-2019-FINAL.pdf 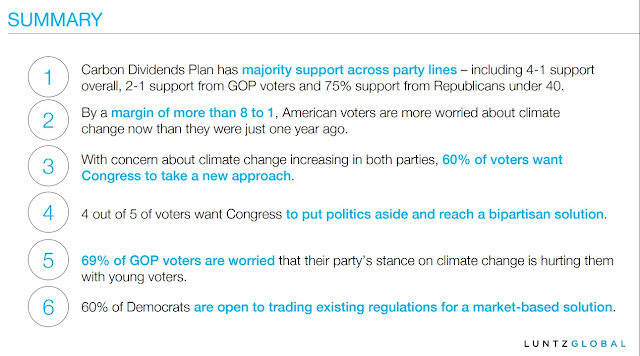 The following show the poll results in greater detail. 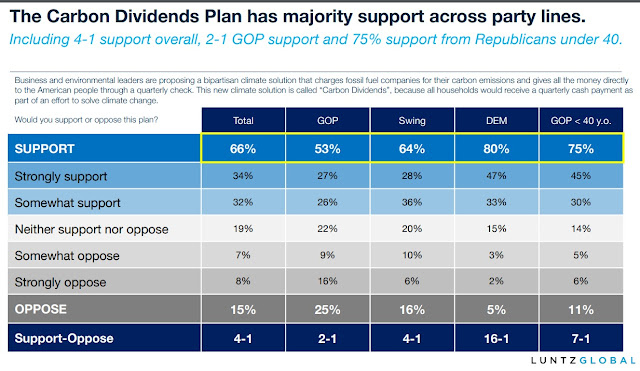 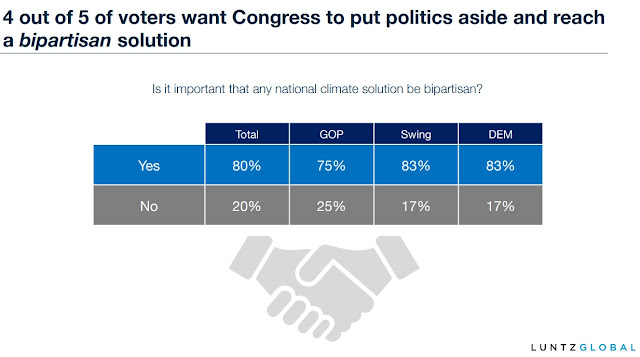 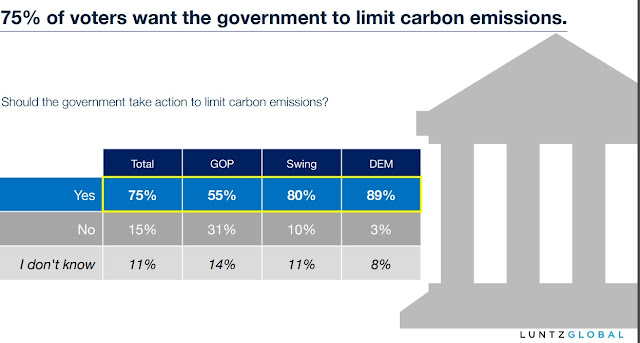 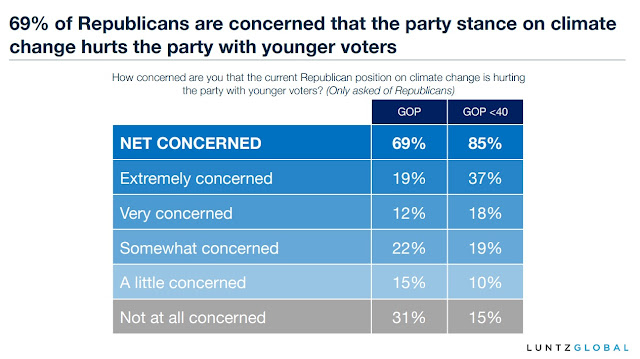 These poll results are very consistent with the results published at https://cresforum.org/wp-content/uploads/2019/07/CRES-Forum-ACC-Polling-Memo-2019.pdf by the Citizens for Responsible Energy Solutions (CRES) Forum.

The message is clear: Republicans must have a message that will resonate with the voters about solving climate change if the party is to earn the votes of many of the Republicans, much less the Independents. Working together we can do this!