New installations of wind and solar power generating units can effectively compete with new conventional sources and even with  some existing conventional generating plants.

The drop in costs have been the most dramatic in recent years for solar. 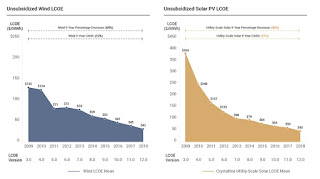 In its previous LCOE 11.0 report, it concluded:

"As LCOE values for alternative energy technologies continue to decline, in some scenarios the fulllifecycle costs of building and operating renewables-based projects have dropped below the operating costs alone of conventional generation technologies such as coal or nuclear. . . .

Lazard's chart of historical means shows graphically in a different way how cost competitive the alternative energy sources have become: 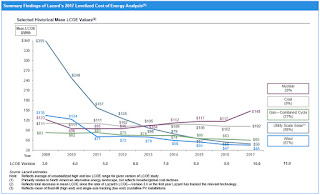 However, a different source takes a different view. Members of the University of Calgary broke down the LCOE into fixed costs and variable costs, and published this chart: 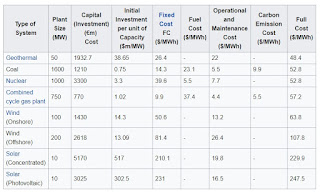 Levelized cost of energy, May 2018

From this chart, renewables don't look so competitive.

A U.S. Government source, the U.S. Energy Information Administration has a complex analysis posted at Levelized Cost and Levelized Avoided Cost of New GenerationResources in the Annual Energy Outlook 2019. It says:

"Actual plant investment decisions are affected by the specific technological and regional characteristics of a project, which involve many other factors not reflected in LCOE values. One such factor is the projected utilization rate, which depends on the varying amount of electricity required over time and the existing resource mix in an area where additional capacity is needed. For example, a wind resource that would primarily displace existing natural gas-fired generation will usually have a different economic value than one that would displace existing coal-fired generation. A related factor is the capacity value, which depends on both the existing capacity mix and load characteristics in a region. Because load must be continuously balanced, generating units with the capability to vary output to follow demand (dispatchable technologies) generally have more value to a system than less flexible units (nondispatchable technologies) such as those using intermittent resources to operate."

What energy source is most cost effective may vary by part of the world. For example a chart available for Germany shows the following" 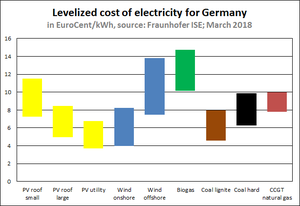 A Forbes article states the following:

"The changing cost dynamic between renewable energy and fossil fuel is spurring coal closures along with new wind and solar installations. As the weighted LCOE for utility-scale solar fell from more than $350/MWh in 2009 to less than $50/MWh in 2017, cumulative installations rose from 1 GW in 2009 to more than 30 GW cumulative installed capacity in the third quarter of 2017." 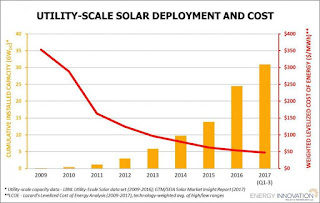 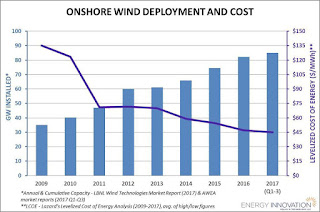 Citing the The National Renewable Energy Laboratory’s (NREL) Annual Technology Baseline 2017 report graph, it projects that both solar and wind power generation to drop in cost. It shows wind as more cost competitive than Natural Gas Combined Cycle now, and that solar overtakes NGCC before 2030. 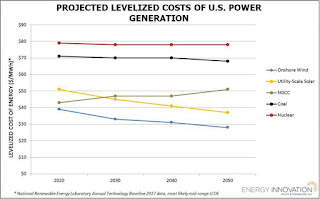 Alternative energy sources costs are dropping, but whether a utility company chooses to invest in renewables is a complex decision. The future of renewables, however, appears bright.

[1] "Levelized cost of electricity (LCOE) represents the average revenue per unit of electricity generated that would be required to recover the costs of building and operating a generating plant during an assumed financial life and duty cycle. LCOE is often cited as a convenient summary measure of the overall competitiveness of different generating technologies." Levelized Cost and Levelized Avoided Cost of New Generation Resources in the Annual Energy Outlook 2019